The combined efforts of Charles S K and Saif S A.
With similar outlooks and musical influences, it was only a matter of time for the two to collaborate on something…
In early 2022 they decided to go ahead with the idea of a collaboration. The result was the founding of a project now known as K O L O S S A L.
Brooding with dense atmospherics, textures glitch and heavy rhythmic intricacy.

He has been creating music since the age of 16. with various instruments and methods – mainly focusing on playing guitar and using multi-track analogue equipment for recording and production.
Saif was an original line-up member of the band “Abhorred“, the first death metal band to emerge from the underground music scene in Dubai, UAE.
In 2002 he left the band to pursue his studies in Digital Sound Engineering at Barnfield College, Luton, England.
His approach to music is a daringly beautiful combination of atmospheric music with emphasis on intricate rhythms, variety of tone and the layering of electronic textures over a more traditional approach.
Saif describes his songwriting method as being vertical “I add layers and subtract others over shifting and interlocking rhythmic parts. The main theme of the track is always there in one form or another. it’s usually the first idea I start with. everything around it is a result of that first spark.”
_______

He is recording music as „Fake Plastic Heads“.
He lives in a small town near Munich, Germany, and produces mostly electronic sounds with experimental flavours and bits of noise, glitch and IDM.
The name of the project should need no further explanation, as all of us know and have met fake people throughout our lives. This telling name is a way to address people that might have struggled way too long, relying on fake friends or relationships.

The main focus of the music lies in the translation of innermost feelings into something organic and abstract – that would last in the head of the listener. The journey of each song and album is nothing for the short-attention-span generation. Building audio-visual worlds is kind of more like a cinematic journey.
The dark and often industrial soundscapes serve as a basis for complex structures of sounds and noise.
It’s an approach, trying to reduce the impact of suffering and dealing with more abstract regions of the human psyche. 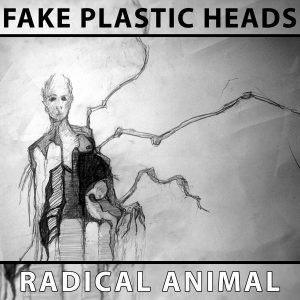